If walls could talk, the ones in Münster would have a lot to say. Since early medieval times, the city has played an important political and geographical role in the Europe, and has been the backdrop for many important historical institutions and people of influence. While Münster is well known today for its University and status as bicycle capital of Germany, the city most famously served as the location for the signing of the Westphalian Peace Treaty in 1648, and this relevant connection to peace-making is still being honoured and embraced in the city to this day. But more on that later, we shouldn’t skip ahead too far – let’s start at the beginning.

According to historical data, the city was officially founded in the year 793 by Charles the Great, who called on his counsellor Saint Ludger to serve as Bishop. Ludger was tasked with converting the Saxons (who Charlemagne had been in battle with) and evangelizing the Münsterland. He built his monastery on the banks of the river Aa, which flows through the city. The influence that the Bishop and his monastery had on Münster is still clear today, and traces of his influence are still commonplace here – there are streets and churches named after him, his monastery still stands proudly in the middle of Münster, and even the name of the city is a derivative of the German word monasterium [1].

In 797, Ludger also founded the school Paulinum, today a Gymnasium still very much in operation and known as one of the oldest schools in Europe [2]. In the centuries that followed, the church was responsible for much of the development in the growing city, and was influential in developing governing concepts such as the city council (Rat) and the first political Order with open councils (Bürgerversammlung), dating back to 1160. In 1300, Münster was one of the most influential Hanseatic Cities, playing a powerful role within the most robust trading block in the world at the time.

Panoramic view of the city of Munster, Germany, from the south-west, c1570. Twin towers in centre are St Paul's Cathedral and to the right St Lambert's Church. Universal History Archive/Universal Images Group Rights Managed / For Educational Use Only

However, the power and influence held by the city could not go on unchallenged: in the 16th century, the political unrest following radical religious reformation reached Münster. From 1534 to 1535, Anabaptists from the Netherlands under leadership of Jan Mathis and Jan van Leiden implemented their regime in Münster, outlawing Catholicism and establishing a community where money and owing property was banned, consequently forcing many citizens to flee. When the Catholic Bishop’s forces reconquered the city in 1535, the Anabaptist leaders were tortured and then executed, their bodies then publicly displayed in the steel cages which hang to this day on the tower of Lamberti Church in the city centre. Despite the dark shadow cast on Münster during this turmoil and during the wars that followed, a landmark peace was soon to come. 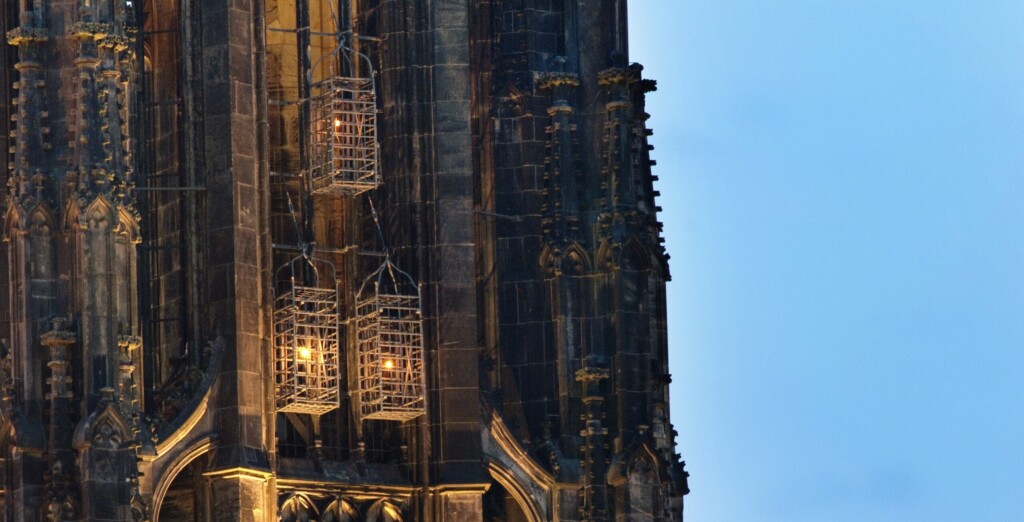 End of War and the Peace of Westphalia

In 1618 within the Great Roman Empire a terrible war broke out, now known as the Thirty Years’ War. Small disputes over religion and the subsequent power to rule erupted all around the empire and eventually escalated into full blown war, recognized by historians as of the most destructive wars in European history – in Germany, some areas experienced a population decline of 50%. This fighting re-ignited conflicts related to the Eighty Years’ War in which the Netherlands sought independence from Spain, and had until that point been able to maintain a twelve-year truce. Involving many changing and sometimes unlikely alliances, the nations today known as Germany, Spain, Denmark, Sweden, France, and the Netherlands were all engaged in the conflicts at some point.

One of the most historically relevant periods for the city began in the 1640s, when discussions among leaders began in hopes of ending the Wars. Münster became one of the neutral cities where representatives of the parties involved in the Thirty- and Eighty-Years’ War met to negotiate a peace treaty, thus ending the period of brutal conflict that had embroiled all of Europe. Signed in 1648 in the city halls of Münster and neighbouring Osnabrück, the Peace of Westphalia put an end to the conflicts, marked the official birth of the country that is our neighbour today – the Netherlands – and, as some scholars claim, may have been the official beginning of international law. In these peace talks the principle of state sovereignty was first implemented, and more than 350 years later the importance of the Treaty’s signing in the Münster City Hall continues to be recognized as a part of the city’s identity. Known still today as the City of Westphalian Peace, Münster’s city slogan reads “Peace through dialogue”. 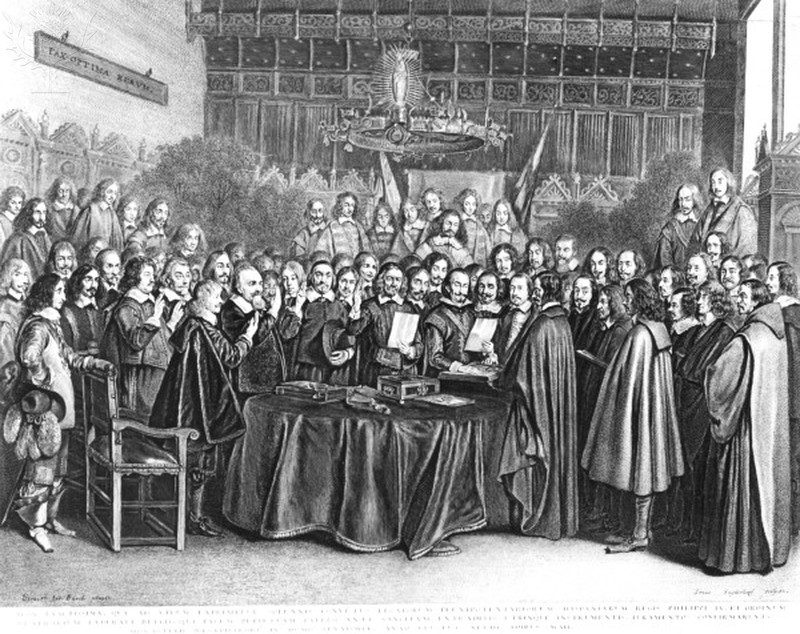 The Oath of Peace at Muenster/ Terborch

The Start of a “Modern Münster”

In the 18th Century, Münster’s appearance was transformed through several imposing architecture projects led by the prince-bishop’s master builder, Johann Conrad Schlaun. Of the baroque buildings that were landmarks of their time, the Erbdrostenhof (Insert: picture of Erbdrostenhof) and Münster’s Schloss (Insert picture of Schloss) among others have remained. Today the Schloss is home to the University’s administration and several lecture halls.

During this time period, the Promenade, or ‘bicycle highway’ was also designed by the builder Schlaun. This circular tree lined path around the city centre replaced the fortification defence walls with a pleasant green space to be enjoyed by the public.

The 19th century saw the establishment of further Münster landmarks, many of which are still relevant in the cityscape. Founded in 1875, the first zoological garden and animal park in Westphalia opened its gates in Münster. Still today Münster’s Zoo remains a popular family destination for a day out. The official opening of the harbour in 1899 was another milestone in Münster’s history: following the completion of the Dortmund-Ems channel, Münster became connected with the North Sea and served for many years as a strategically-located port city for imports of grain, wood, and colonial goods [3].

Since 1915 Münster has consistently had more than 100,000 Inhabitants, classifying it as a Großstadt, or major city. Although the University was first founded in April 1780, the official establishment in 1902 of the Westfälische Wilhelms-Universität Münster as it is known today has attracted many students to Münster, and the student population has played a vital and influential role in the social landscape of the city.

The year 1924 marked the creation of the Western German Broadcasting Company (Westdeutscher Rundfunk) where the first programs were broadcast from Münster. Only a few years later, another landmark that defines the city to this day was ready: in 1928 the first part of the man-made Aasee was flooded – the second part followed in 1931. This gave Münster a central recreational zone that is still a highlight of the city and serves as a beloved spot for meeting friends for a walk, enjoying the sunset, or grilling in the summer on the grassy banks of the lake. 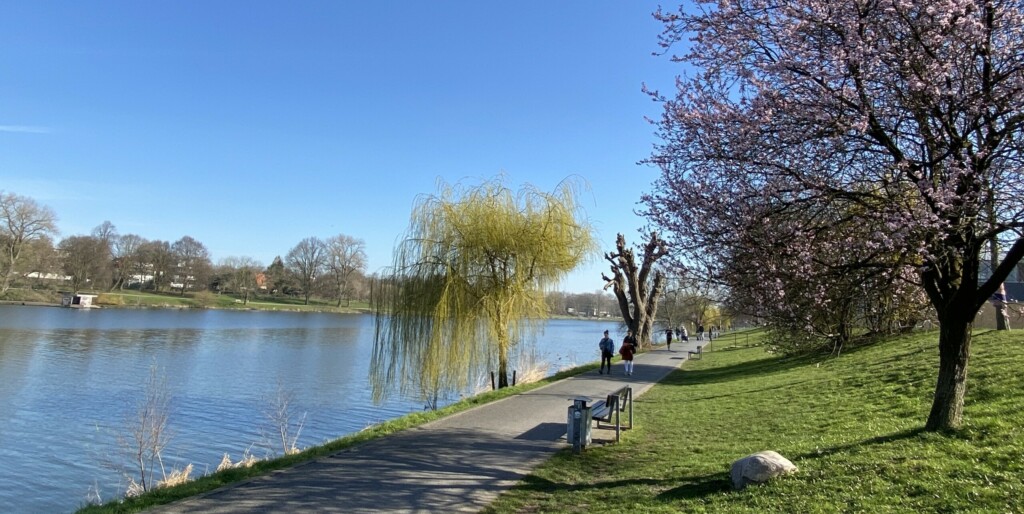 Münster in the Second World War

After the National Socialists came into power and established Münster as a military headquarters in 1933 for much of the surrounding region, the Villa ten Hompel, a mansion owned by one of the richest families in Münster became an administrative centre of the Nazi Police and served as a regional administration facility in planning the deportations of Jewish people and others to death camps in the eastern reach of the Third Reich. Today, the Villa is a museum and serves as a space open to the public for historical research and education [4].

Preceded since 1933 by anti-Semetic acts, in 1938 Münster’s historic synagogue was demolished in the Kristallnacht, the Night of Broken Glass. In December 1941, 100 Jewish citizens of Münster were deported to death camps in the eastern part of the Third Reich, and three further such deportations followed. Only 24 of the 300 Münster Jews deported to the East survived.

Due to its militaristic relevance, Münster was one of the most destroyed cities in Germany when the war ended. Ninety percent of the historic centre and over sixty percent of the surrounding urban area was destroyed. Of the 132,800 inhabitants tallied in 1939, only 23,500 remained in 1945. When reconstruction began, an authentic restoration of the historic old town was decided upon in 1949, and large parts of the city centre were rebuilt in the previous historic style, although subtle differences on some buildings clearly mark the pre-and post-war parts of the façades. 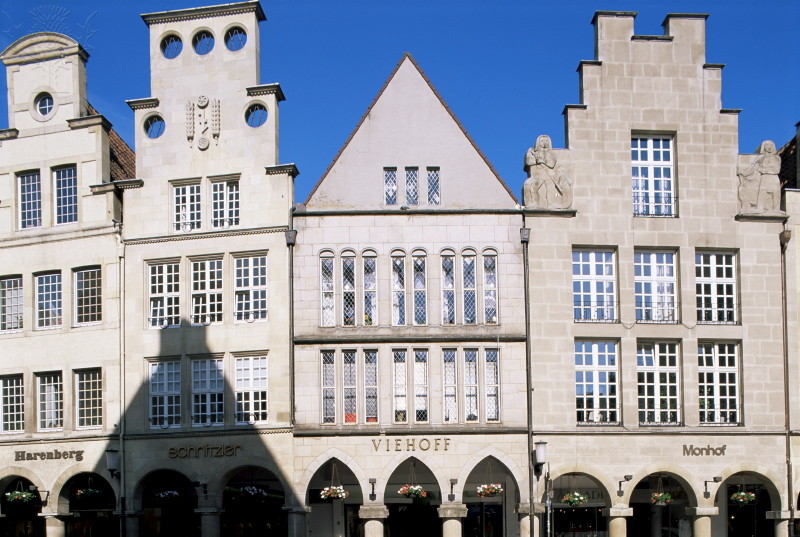 Münster as a globally known city

In the 1950’s, Münster began engaging in international partnerships with other cities and eventually established official relationships with York, England in 1957, Orléans, France in 1960, Kristiansand, Norway in 1967, Monastir, Tunisia in 1969, Rishon le Zion, Israel in 1981, Fresno, CA, USA in 1986, Rjasan, Russia in 1989 and Lublin, Poland in 1991. The connections to these ‘sister cities’ are thought to help promote peace through cultural exchange.

In 1977, Münster was home to the first ‘Skulptur Projekt’ exhibition [6] in which many internationally renowned artists participated. Due to the success of the initial project, exhibitions are repeated every ten years with varying themes, attracting at the last count over half a million visitors from over 14 countries [7]. Münster has thus become the city with the most modern sculptures throughout its city scape, with the next exhibition planned for 2027. 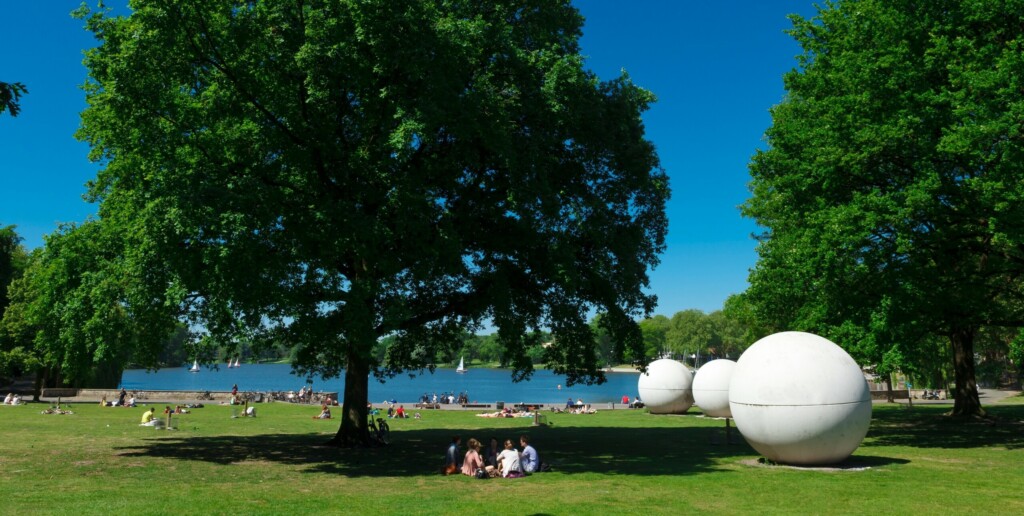 Münster won the LivCom Award in 2004; for the category of 250,000 – 700,000 Inhabitants it was named the most liveable city in the world. Münster is home to a large international population, in part due to the many University offerings specifically for international scientists and researchers. The WWU has more than 550 partnerships with other universities and scientific institutions worldwide [8].

The city administration of Münster perhaps summarises it best: “Münster is a multi-faceted city. It is a city of science and learning, the City of the Westphalian Peace, a green city, the capital city of bicycles, and Germany’s Climate Protection Capital. Westphalia’s longstanding regional capital is young: not least thanks to around 58,000 students. It is an outstanding place to live, work, learn and research. It is a place where urban culture, municipal diversity and first-class rural recreation intersect and have a mutually enhancing effect” [9].

We are excited to welcome mipri scholars to the city of Münster? Or other final closing sentence, depending on the peacehub website.

Muenster panorama 1570: Panoramic view of the city of Munster, Germany, from the south-west, c1570. Twin towers in centre are St Paul’s Cathedral and to the right St Lambert’s Church.. Photography. Britannica ImageQuest, Encyclopædia Britannica, 25 May 2016.

Peace of westphalia: akg-images / Universal Images Group Rights Managed / For Education Use Only

Rights Managed / For Education Use Only